Crossing through the Lebombo border post into Mozambique was relatively simple and hassle-free, even with the language barrier. It’s nowhere near as harrowing as international airport customs since 9/11.

Our first encounter with the Mozambique Police was about 100m past the border post. You’d think the checks at border control would suffice for another 50 Km at least? I went through the routine that was to become a feature of our travels throughout Mozambique, several times every day: passports – drivers licence – car registration papers – insurances.

Checks done, we were on our way past Maputo to the Xai Xai District and Praia de Chizavane, where the resort Zona Braza nestles on the dunes of a deserted beach. Be warned that the even though it’s only around 300 Km from the border, the drive is long, being restricted to an average speed of 80 Km/h, and the regular stops for Police checks. 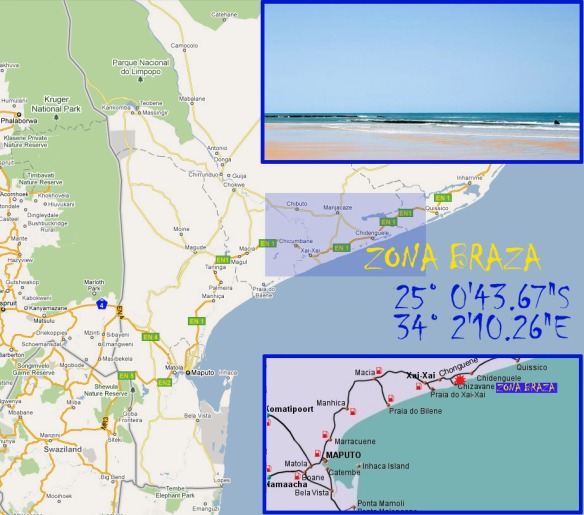 Our journey was further delayed by a tyre puncture which we had to get repaired at a filling station along the way. The repairman was quite thorough and did a decent enough job with what looked like quite primitive tools (in comparison with South Africa).

One way of getting there. Spotted while waiting for tyre repair

Mozambique is a land of contrasts. Huge houses under construction everywhere dwarf the mud and tin shacks and grass huts of the poor. There is a huge gap between the rich and poor, but poverty is much more evident. As you travel further north of Maputo, you begin to wonder how these poor people survive. They seem to eke out a living through subsistence farming and informal trading of goods of various kinds. We met a few guys who were hunting large rats (they called it Movondo or something similar) on one of our drives through the winding dirt road to the resort. There is a distinct lack of any sort of industry on a reasonable scale in these areas.

The number of abandoned buildings, remnants of the Portuguese colonisation of Mozambique, is startling. These must have once stood regally, striking examples of Portuguese architecture. They dot the landscape wherever you look, from Maputo, all the way to Xai Xai and beyond.

Fresh vegetables and various types of fruit are available at informal stalls along the roadside, but buying fresh meat is not recommended from any stalls, even in the markets of Xai Xai. The vegetables and fruit however are good at these markets, and they seem to be always bustling with activity. 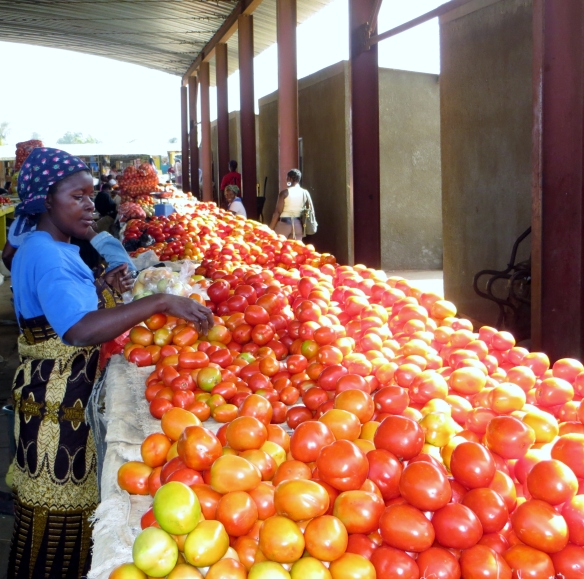 Buying fish, crayfish and prawns is also not recommended at the markets, as the conditions are not very hygienic. It is better to drive down to the beach and wait for boats coming in with a fresh catch. Another thing that is quite noticeable is that the formal shops did not stock the “luxuries” we were used to in South Africa. It is quite apparent that these are mostly poor people with simple needs. 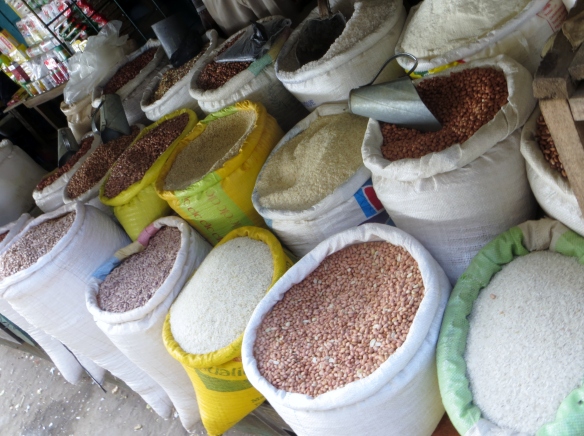 We spent most of our days just driving around, taking in the sights, smells and sounds of life away from the city of Maputo. Very little time was spent at the beach itself which remained deserted for most of our stay. We did not get to experience any authentic Mozambican cooking, but did enjoy a seafood platter in the restaurant at the resort. We also bought some fresh fish one afternoon, which we prepared the traditional South African way. 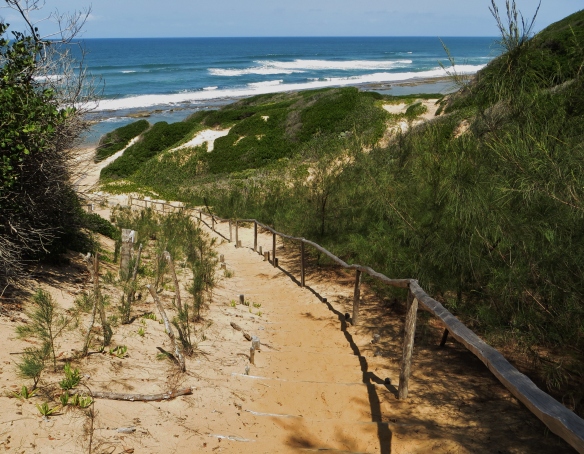 Mosquitoes is not that much of a problem this early in Spring, but it can become quite a problem in Summer. Mosquito nets over the beds in our cabin helped, but the little pests still manage to get through. Lathering on mosquito repellent in the evenings is a good idea. And off course there’s the malaria tablets.

With only a few days available to us, we could not explore further north where there are exceptional beaches and resorts. These will have to stand over for another trip. It was time to head back…

We decided to spend some time in the capital city of Maputo on our way out of Mozambique. It was not a good decision, but worth the experience I suppose. Maputo is a wretched city. Dirty, pot-holed roads, unpainted buildings, heavily congested with traffic, and some of the most reckless drivers I’d seen around. We got out, thankfully without a scratch.

The Mozambique border post is about 450 Km from Johannesburg, just outside the little town of Komatipoort. Xai Xai in Mozambique is a further 290 Km north-east, using the toll route passing by the Capital city of Maputo.

My eventual destination, the beach resort of Zona Braza, was a further 40 Km away, 10 Km of which consisted of a hair-raising drive along a winding dirt road through dense bush. This road is best suited to a 4-wheel drive vehicle, although my front-wheel drive car managed fine, except for the night of our arrival when we got bogged down in the soft sand right inside the resort.

A little pre-trip preparation is necessary to cross the border from South Africa into Mozambique when travelling by car. Here are a few quick tips to prepare:

In the next installment, I will describe my short stay at the Ngwenya Lodge resort just before the border post, which adjoins the Kruger National Park. This stop was necessary to break up the long journey to my eventual destination, especially since driving at an average of 80 Km/h in Mozambique is very tiring.