Saudi Arabia may have lots of oil and sand, but is seriously lacking in humanity.

Life is fleeting and precious, so it should be an imperative for humans to look out for each other. But religious madness more often than not demands that the poorly interpreted decrees of an invisible deity be held in higher reverence than human well-being and life itself. Such is life under Saudi Sharia law.

Raif Badawi, A Saudi national was sentenced in May to 10 years in prison and a thousand lashes. His crime – “daring to create a public forum for discussion and peacefully exercising the right to freedom of expression.” And according to the authorities, he is guilty of one other crime, one that is considered – no declared – an act of terrorism in Saudi Arabia; he is an atheist.

Badawi started a website writing blogs that called for religious tolerance and women’s rights. However the kingdom, no doubt spurred on by fundamentalist religious leaders hell-bent on perpetuating the inhuman Wahhabi form of Sunni Islam, declared this act (one all rational people would call noble) to be insulting to Islam.

As part of a campaign to raise awareness about the gross human rights violations perpetrated by despotic rulers (no doubt religion is a very useful tool), which includes a petition to free Badawi, Amnesty International released this moving clip of his daughter writing to him in prison.

For further reading on the despicable system of justice in Saudi Arabia, look no further than Wikipedia.

Last month I published a post concerning the ridiculous assertion by a Saudi cleric that driving vehicles causes harm to women’s ovaries and pelvis. Women drivers are frowned upon in Saudi Arabia and although there’s no actual law forbidding them from driving, licences are not issued to them.

This weekend, there were reports of at least 14 women from Jeddah, Mecca and the Eastern Province being arrested for participating in a defiance campaign. It’s likely that they’ll be fined, or some could even lose their jobs.

Saudi Arabia features prominently on this BBC News World report, as a country with the least equality between men and women. The map below actually fingers most of the Middle East and large parts of North Africa as the worse places a woman could find herself. And I’m going to refrain from pointing out the correlation between degree of religiosity in these countries and the disdain for women’s rights… Oh crap! I just did! 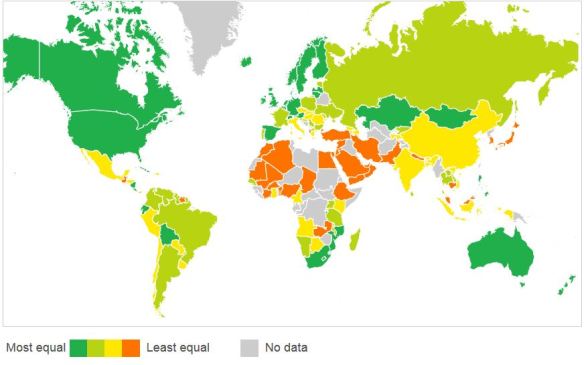 On a lighter but welcome note, there are still good men in Saudi Arabia, as this YouTube video which has gone viral points out. Comedian Hisham Fageeh and some friends did a send-up of Bob Marley’s No Women, No Cry to illustrate just how absurd this driving ban is.

One can only hope these pathetic clerics relent and allow women to drive soon, among other human rights they’re currently denied.

The use of religion and culture to violate women’s rights is a vile and cowardly pursuit, but is distressingly prevalent throughout the world.

The U.N. Commission on the Status of Woman which has been lobbying since 1946 for the advancement of women, is at the moment pushing for acceptance of the declaration on woman’s rights. However Egypt, Iran and Russia together with the Vatican (no surprises there!) are “threatening to derail the women’s rights declaration by objecting to language on sexual, reproductive and gay rights.” Egypt in opposition, has unashamedly proposed an amendment which will allow men to once again hide behind religious and cultural values.

In a disturbing parallel move, Egypt’s Muslim Brotherhood posted a statement on its website which claims that the declaration will among other things, destroy society by allowing women to travel freely, work, use contraception and control the household finances. That kind of thinking would be hysterical if it was not so shockingly infantile and backward. Even more worrying is that according to the Coalition for Sexual and Bodily Rights in Muslim Societies, this is a position favoured by many Arab governments.

You will no doubt laugh hysterically, but these are the ten objections to the declaration contained in the statement on the Muslim Brotherhood’s website, that they believe will lead to decadence:

This retarded mentality roughly translates into “Woe be unto men if we can’t have multiple wives, but heaven help us if we allow them to travel freely, use contraception, file for divorce, accuse us of rape, decide how to spend money… and fuck other women.”

Why are these men so afraid of women?

Men are taught to apologize for their weaknesses, women for their strengths. – Lois Wyse

It was bad enough that the President committed the dreadful blunder of patronising women on national television during Women’s Month in South Africa. It’s then really lamentable when an organization that is supposedly in place to promote equality and women’s rights, supports this patriarchal madness.

The ANC Women’s League (ANCWL) which is headed by Angie Motshekga [remember this inept woman who doubles as the Education Minister?], today defended the atrocious comments by President Zuma, claiming that they were taken out of context, because he was referring to his daughters only. Judge for yourself if these statements were misconstrued:

I was also happy because I wouldn’t want to stay with daughters who are not getting married, because that in itself is a problem in society. I know that people today think being single is nice. It’s actually not right. That’s a distortion

You’ve got to have kids. Kids are important to a woman because they actually give an extra training to a woman, to be a mother.

League spokesperson Troy Martens’ attempts to rationalize these absurd statements is a disgrace. She performs a huge disservice to women everywhere. How is that out of context when Zuma clearly refers to it being a problem with society?

The ANCWL continues to emphasize what a toothless organization they really are. Their only function seems to be as cheerleaders for their “ruler” and the other incompetent ANC Ministers in government.

Considering this, shouldn’t the ANCWL be renamed ANC Woman in League with Hypocrisy, Patriarchy, Misogyny and Dirty Politicians?

It was pretty hot today. The climate control in my car was at full tilt.  It was therefore a little 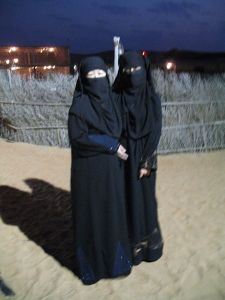 disconcerting, gazing in my rear-view mirror at two women in those black tent-like outfits, riding in an older-model car that obviously did not have the same comforts.

I could not tell if they were comfortable or happy; all I could see were their eyes through a rectangular slit cut in the headdress which formed part of the ensemble known as an abaya, traditionally worn by Moslem women.

I resisted thinking about what they had on underneath and failed. I hope it was nothing because perhaps that would have made them slightly less hot. I really don’t know; I have never tried wearing a shapeless tent-like outfit before.

At this point, I know there will be those who will accuse me of being disrespectful towards the Islamic religion. Well…. I’m being no more insolent towards Islam, than I’m towards every other religion; I have the same loathing for all religions. Don’t take it personally.

This is not about your religion; well not entirely. It’s about the women who are affected by it. Maybe I’m presumptuous, but I can’t imagine any women willingly dressing up in tent-like outfits on a hot day. I’m not saying it does not have practical applications in some parts of the world; it just seems so impractical and silly on a hot day in this part of the world.

Women would have to be absolutely terrified of the maker of such a dehumanizing religious law, not to mention the cruel earthly guardians self-appointed to enforce it. That would be about the only reason for dressing up like that, apart from dementia and a bad case of self-loathing.

Women’s beauty is meant to be shown off and celebrated. It’s meant to be enjoyed by both men and women alike. I just can’t abide any archaic law that prevents me from savouring the beauty and form that makes up a women.

Women have a right to live with freedom and dignity. She should not tolerate any god or man who would take that away from her, lest she be prepared to live in mental and physical slavery for the rest of her life.