Another Brick In The Wall 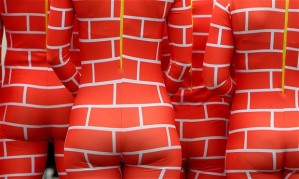 Mamphela Ramphele, a well-known South African academic reckons that our education system is worse now than under the “bad old” days of apartheid. Off course, a fair measure of ordinary South Africans with little to no academic qualifications, have been saying the same thing [more or less] for some time now.

Now that it’s being backed up by a respected academic, gives this contention more bite.

However Angie Motshekga, the latest in a procession of ANC Ministers, under whose tenure the education system has been steadily putrefying, prefers to keep her head lodged firmly up her ample butt, by insisting that that’s not the case. This jewel in the ANC’s illustrious line-up of incompetent Ministers, claims that the problems in education are:

We may not be where we want to be. But it’s wrong — I think treacherous — to say we’re going back to Bantu education…

No! no! no! you pompous political prat. You, Angie are not at the level required to administer something as important as education. You are the traitor here; for stabbing your own people in the back and preparing them to be little more than voting fodder. You deserve to wear the dunce cap for the rest of your miserable, deceitful life.

Shame on you for being just another brick in the ANC wall of incompetence and denial.