It’s been exactly a week since Thuli Madonsela the South African Public Protector, released a report into the outrageous spending of R246-million of public funds on security (sic) upgrades to President Jacob Zuma’s private residence Nkandla.

Oh there’s been the usual ducking and dodging, disingenuous comments and feigned outrage by the President’s hand-picked Ministers and acolytes, but Zuma himself has kept mum except to utter these condescending, yet self-reflective remarks at some political rally today:

Some take the people of South Africa for granted and underestimate their intelligence.

Be an example and lead.

The guy’s such a smug piece of political vermin, he’s blind to the irony.

Off course, Zuma’s henchmen are not the only people rallying to his defence; ordinary members of the (credulous) public such as this one in an open letter, tried to cast veiled aspersions at the Public Protector, but failed gloriously – and not because of his atrocious spelling and grammar. It was actually quite hilarious to read (if you can stomach the grammar) in the end.

Others however were not fooled by the claims of innocence, as the The Lone Groover’s (rather good) attempt at poetry demonstrates:

My president is a fool,
he has no understanding
of the difference
between
serve and rule.

My president is a liar,
he lines his pockets
and he lights the fire
giggling
over his objects
of desire.

My president is a thief,
rotten to the core
way beyond belief
living in the past
and thinking like a chief.

My president makes me sad
as he squanders all the resources
that we have.

My president makes no sense
with his claims of innocence.

And my people make me cry
when they vote once more
for this guy.

However, the best riposte by far has to be this cartoon: 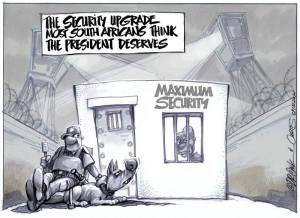 So for now, the long-suffering public is in for the long wait, as it appears likely that Zuma will waste yet more of our taxes fighting this thing in the courts.

If you’d like to wade through the rather lengthy Public Protector’s report on the Nkandla scandal, here’s a PDF version: