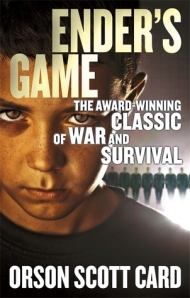 I found Ender’s Game listed in a Top 100 Books list somewhere, but can’t recall which one in particular. The decision to read it, I recall, was therefore made for me when I saw the other great books it was listed with. And I’m not really a fan of the science fiction genre, preferring science fact instead.

Off the bat, I found it quite disconcerting to read with the main protagonist, a boy of about six, speaking with the maturity normally associated with a fairly well-educated adult. Even if one was expected to accept that Ender Wiggin was a highly gifted child, it does stretch science fiction a bit far. However, I did find his sister Valentine, presented as of similar brilliance to Ender, to be more pragmatic in her premature maturity.

In the future, Earth having survived two wars with the Formics, an alien species more colloquially referred to as The Buggers (even by the adults, which was also disconcerting), are preparing to fight a defining war with them. To this end, the earth under the leadership of The Polemarch, The Hegemon and Strategos create an International Fleet to fight the Buggers. They recruit young gifted children to undergo training initially in the Battle School which is in earth’s orbit, and later in Command School, where only the most talented strategists pass through.

Ender is groomed, conditioned, manipulated and dare I say, brainwashed under the tutelage of Commander Hyrum Graff, to become the only hope for the forces of Earth, in defeating the aliens.

His manipulation is made complete when he is tricked into eventually defeating the aliens while under the impression that the battle was the final simulation at Command School to effect his graduation.

While the novel is often violent, it is not overly so as some have described it in their criticism. The premise upon which the book is based is very interesting, but I did not find it appealing, nor particularly riveting. I also do enjoy a bit of humour and this book had little or none of that. I also have to admit that finding out Orson Scott Card was a Mormon, may have tainted my liking for his work, but I believe there was more reasons besides.

A film version of the book is currently in production, and I have no doubt it will be made much more violent than the book actually is. Still it may be worth watching just to see how faithful the makers stay to the book, what with Scott Card being involved in the production.

I am therefore going to give the sequels a miss unless someone can give me a very convincing reason to read any of them.