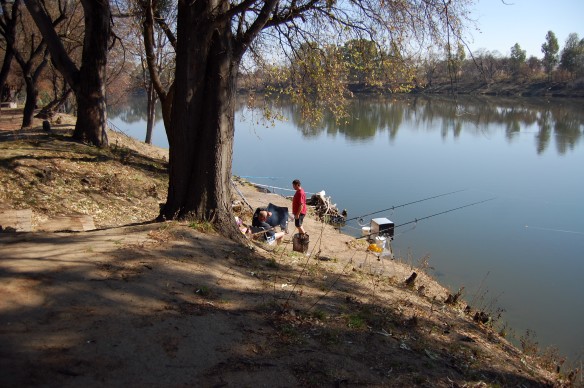 I thought that the shadows and the reflections of the trees in the water on the opposite bank, would add some interest to the standard fishermen scene. I also deliberately used this angle to get the diagonal line of the river bank running about mid-way through the picture.

After the Party by Andrew Feinstein

Subtitled “A Personal and Political Journey inside the ANC” Andrew Feinstein served as an ANC member of parliament, and comes across as probably the only honest politician in South Africa, although he has resigned from Parliament some time ago already. The revelations of political corruption and the cover-ups within the South African ANC-led government, specifically the arms deal scandal leaves one in no doubt that the South African public has been scandalously defrauded and treated with utter disrespect by this government.

Although Feinstein mentions one or two shining lights within the ANC-led government, the overall picture is one of doom and gloom, revealing generally only corrupt, incompetent, nepotistic, self-serving politicians. The book becomes all the more relevant with the unfolding of recent events, most notably the early release from prison (more accurately, hospital) of convicted fraudster, Schabir Shaik with a cloud of suspicion surrounding the circumstances for release. Add the disgraceful antics of Jacob Zuma trying to squirm his way out of appearing in court to face corruption charges, most of which stem from the arms deal, and the relevance of this book still stands, even though it was released in 2007.

Feinstein left the country soon after his resignation from parliament, and it surely must be a major loss to the country, especially when one considers the utter trash polluting the current political scene.

The Goldilocks Enigma by Paul Davies

Sub-titled “Why Is the Universe Just Right For Life.” Acclaimed physicist Paul Davies reminds me of the many people who have this aptitude for mental gymnastics, in that they see no problem with trying to fit creationism into their scientific theories. Richard Dawkins, in his book the God Delusion, described Davies as someone who “…seems to hover somewhere between Einsteinian pantheism and an obscure form of deism…”

Religiously inclined scientists (and others) have for some time proposed that because the Earth resides in a seemingly perfect zone (the so-called goldilocks zone), it must have been created by some supernatural entity, most times called god. Someone once told me that this was akin to the puddle of water looking around it and proclaiming that the irregular-shaped hole that had formed around it (the water), was just right for it (the water) to fit in.

Although Paul presents fascinating facts about science in general and particle physics in particular, the conclusion he reaches, that the universe is just right for life,  is really annoying to say the least. Considering that we have yet to come across (human) life anywhere else in the known Universe (that is not to say that there is no possibility of life where we have not looked yet), apart from Earth, I would say that the Universe is positively antagonistic towards life.

It seems to me that there is a genuine scheme of things – the universe is ‘about’ something. But I am equally uneasy about dumping the whole set of problems in the lap of an arbitrary god, or abandoning all further thought and declaring existence ultimately to be a mystery.

The God Delusion by Richard Dawkins

Richard Dawkins has not exactly found favor with some of my fellow atheists who accuse him of turning atheism into some sort of crusade, but the God Delusion has sure helped me cement my breakaway from religion. For me, Dawkins comes across as a respectable gentleman who decries the rise in religious fundamentalism and sincerely wants the world to adopt secularism.

The book provides a fairly good exposé on irrational (religious) belief systems and is quite easy to follow. Recommended as a good starting point for anyone afflicted with doubts about religion, but is also recommended to fervent religionists alike.

The God of the Old Testament is arguably the most unpleasant character in all fiction: jealous and proud of it; a petty, unjust, unforgiving control-freak; a vindictive, bloodthirsty ethnic cleanser; a misogynistic, homophobic, racist, infanticidal, genocidal, filicidal, pestilential, megalomaniacal, sadomasochistic, capriciously malevolent bully.